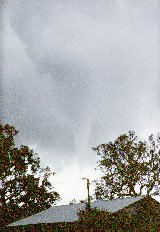 Most readers of Storm News must now be aware of the day (29th September 1996) when three tornadoes were reported in NSW. It seems the aftermath was more interesting than the actual event with more and more evidence being collated of the damage from the third tornado of that day. This includes countless photographs of damage and one photograph of the tornado itself!

This tornado struck the township of Bundella (located about 100km southwest of Tamworth in central northern NSW) around 4:30pm. It caused significant damage to property and trees. Several properties were effected although one property seemed to have had buildings aligned almost in a direct path covered by the tornado and therefore suffered most of the reported damage.

Discussion of the tornado and eyewitness accounts

As with the other tornadoes that day, this tornado moved in a path approximately from the northwest to the southeast. Close examination of tree damage reveals some evidence of trees felled slightly inwards: consitent with convergence at the surface associated with tornadoes. The damage path varied from 100 to 300 metres in width. The most intense damage seems to be consistent with an F1 to F2 category.

There were only a few people who actually observed the tornado. Mrs Davidson described it as a '...funnel filled with debris..' Nobody seemed to comment on its speed or its behaviour. There were no descriptions of debri being lifted off the ground, the tornado touching down or entering its rope stage. Nevertheless, if the tornado travelled approximately 60 kilometres, it is a very significant observation since such great paths are not easily observed in Australia due to its sparse population and vast areas of inaccessibility.

Mrs Traill, a storm spotter with the Bureau of Meteorology, did not actually see the tornado but gave an excellent description of the damage. Her account of the storm and damage is as follows:

"This storm [tornado] travelled approximately 40 miles (64 kilometres) in a southeast direction and in an almost straight line ...There was complete devastation in the centre and no damage outside the path.....Trees were uprooted; some at ground level...The tops of trees were twisted off....Fences were flattened. I have never seen anything like it...".

Mrs Campbell who lives nearby was in her house at the time around 300 metres from the tornadoe's path and totally unaware of the approaching tornado. In fact it was not until there was a blackout that she decided to walk outside and was '...shocked to see what appeared to be a war zone !...'. This observation and that of others suggest that the tornado most likely did not make a loud roaring sound similar to that of an approaching freight train.

The following indicates examples of tree damage caused by the tornado including some twisting.

All photographs and the account of the tornado are courtesy of Mrs Campbell, Mrs Traill and Neal Davison all from Bundella. Many thanks to these and particularly to Mrs Traill for her overwhelming effort in collecting and sending the photographs. We certainly appreciate that without these pictures and accounts, this article would have been almost worthless.