In a previous article, readers may recall the day (29th September 1996) when three tornadoes were reported in NSW. This particular day produced several supercells aligned in an approximate north-south line. One of the supercells spawned a tornado at Bearbung, near Gilgandra in central northern New South Wales. Chris Cooke, now a storm spotter with the Bureau of Meteorology, watched as the tornado touched down at around 1:30pm and approached near his family property. It caused extensive damage mainly to trees, fences and power lines. It also removed a silo (which was full with 70 tonnes of oats) off its foundation and moved cars about 200 metres.

"At the start what startled me was a loud bowing noise like a jumbo jet with a slight earth vibration... there was a hail shower (very short and sudden)...big mass of rotating clouds (fairly fast [IN ROTATION] anti-clockwise, I think... The tornado moved from northwest to southeast...I was 500metres to 1 kilometre from the closest point of the tornado. ...I could see debri, vaguely...Even though I was fairly close, it was calm, an eerie calm though..."

Most of Chris Cookes' descriptions relate closely with other tornado reports in Australia and those in the United States. It is not uncommon for a noise resembling a large freight train to occur with approaching tornadoes. This is consistent with the jumbo jet noise reported by Chris.

Another observation consistent with Australian tornadoes particularly in northern Australia was the movement from northwest to southeast. In the northern hemisphere, tornadoes mostly move from the southwest particularly the classic storms associated with the dry line in the united States.

The tornado travelled a distance of about 20 kilometres and according to Chris travelled at approximately 30 km/hr. In order to take photographs, Chris chased the tornado for about one kilometre. As he observed the tornado, he could see trees being ripped out and thrown: with "...their roots flying around...". Chris also stated that surrounding trees remained untouched whilst trees within the damage path were defoliated, uprooted or snapped.

One of the most important features of this storm is the observation of a second wall cloud. Chris arrived home to find another area of rotation around the time the other tornado disappeared. Now this area of rotation did not touch down where Chris was but I believe that it touched down in the Elong Elong area. This was the second tornado of the day, the second tornado out of the three reported that day. If this was not the tornado, then it was the original tornado that touched down a second time. The exact times needs to be known to determine which wall cloud produced the second tornado.

According to Chris, this tornadic thunderstorm was only one of the several severe thunderstorms that occurred that day through his area, most of them producing hail.

This photograph shows the tornado roping out.

At this stage, the Fujita scale intensity is not known for this tornado.

The following are zoomed images of the tornado more like the distance that Chris Cooke would have experienced when photographing and observing the tornado. 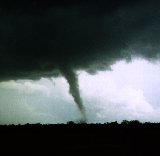 All photographs and the account of the tornado are courtesy of Chris Cooke. Michael Bath and I very much appreciate it.